09.25.11 “The Book of Ice”: Music + Conversation with Paul Miller (aka DJ Spooky) and ODEONQUARTET

Sunday, September 25,  2011 7pm
Music + Conversation with Paul Miller (aka DJ Spooky) and ODEONQUARTET and his new book “The Book of Ice”

Penthouse of The Sorrento Hotel

$40/person. Includes a copy of The Book of Ice.

“Paul D. Miller’s The Book Of Ice is a beautiful, category-shattering hip-hop journey back from the end of the world, one that summons the hope to turn apocalypse into possibility. Groundbreaking and moving.”

Jeff Chang, author of Can’t Stop Won’t Stop: A History Of The Hip-Hop Generation“This is not cool, this is freezing. I still have frostbite.”
Stefan Sagmeister, legendary graphic designer”A rare mind encounters a rare place–this [book of ice] is an entirely new take on the bottom of the world, very cool (but getting warmer).”
Bill McKibben, author “The End of Nature,” founder of www.350.orgMore info on Paul, his adventures in Antarctica, and The Book of Ice. http://djspooky.com/antarctica/
*the night will include music and video peformances.
Paul D. Miller aka DJ SPOOKY is a composer, multimedia artist and writer. His written work has appeared in The Village Voice, The Source, Artforum and The Wire amongst other publications.
Miller’s work as a media artist has appeared in a wide variety of contexts such as the Whitney Biennial; The Venice Biennial for Architecture (2000); the Ludwig Museum in Cologne, Germany; Kunsthalle, Vienna;
The Andy Warhol Museum in Pittsburgh and many other museums and galleries. His work New York Is Now has been exhibited in the Africa Pavilion of the 52 Venice Biennial 2007, and the Miami/Art Basel fair of 2007.

presented by Cornish College of the Arts

Chamber Vs. Chamber No. 5: “Cold Landscapes”

Mount Eerie with the OdeonQuartet and rising-star Kaylee Cole

These three musical outfits will explore the relationship between music and place, and specifically cold and frozen places. 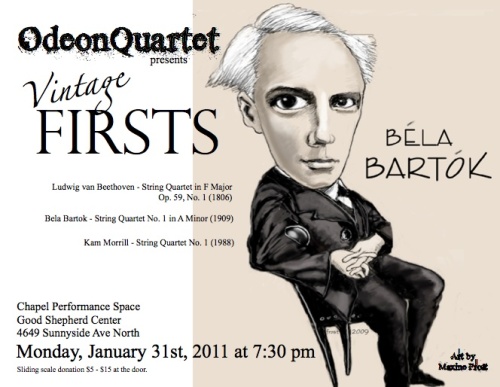