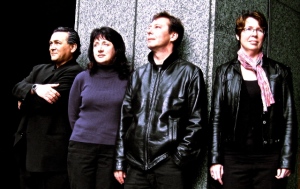 “This vibrant group has made a Kronos-like commitment to a 20th century music all over the artistic map – serialism, evocations of folk and pop music from around the world, American classics and European neo- romanticism” (Gavin Borchert / Seattle Weekly)

Formed in 1999, ODEONQUARTET (their preferred spelling) is comprised of distinguished artists who are dedicated to presenting concerts of the highest artistic quality and building new audiences for chamber music through performances and educational outreach programs.

Recent tours have included Odessa, Ukraine, as well as the Bridging the Cultural Gap tour to Moscow, Russia (2010), where they appeared at Rachmaninoff Hall of the Tchaikovsky Conservatory, as well as an appearance at DOM MUSIKI.

Since 2002 ODEONQUARTET has had an exclusive artist endorsement agreement with Connolly & Co., Inc on behalf of Thomastik-Infeld company (manufacturers of superior strings for the violin family). ODEONQUARTET joins the roster of accomplished professionals which include the legendary Pinchas Zukerman, Ann-Sophie Mutter, Modern String Quartet, Turtle Island String Quartet, Chee Yun, American String Quartet, and Hilary Hahn, among others.

ODEONQUARTET is dedicated to nurturing the human spirit by promoting and perpetuating greater understanding through music.